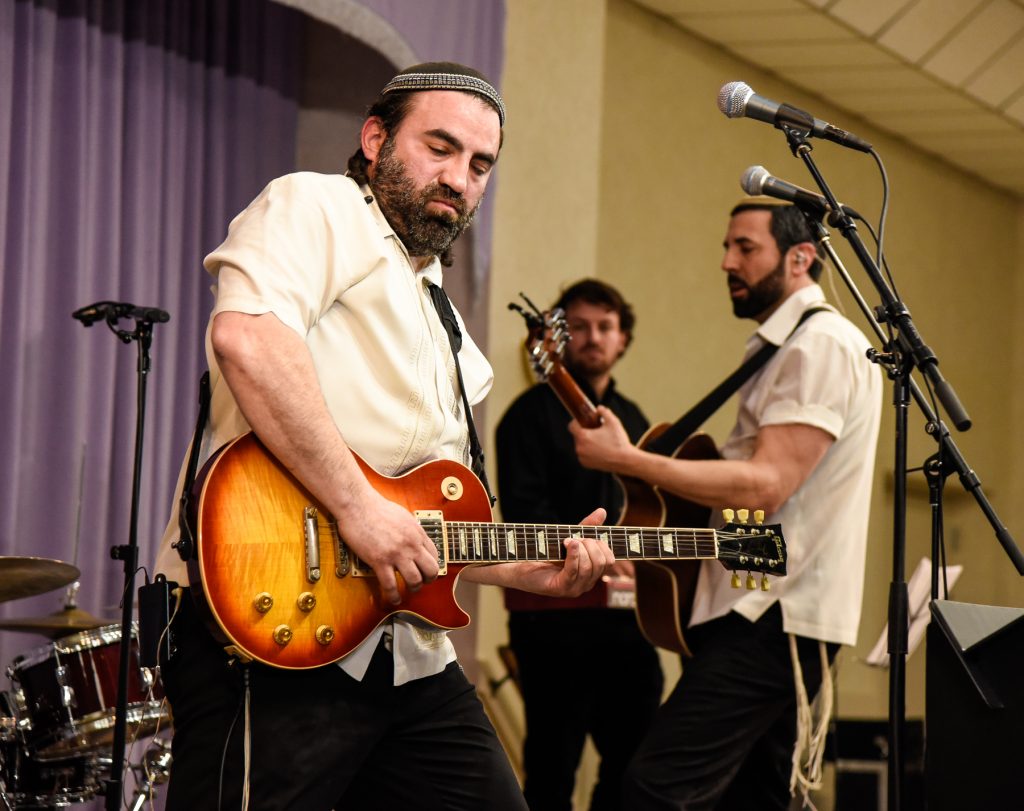 Arranged by Cantor Rochelle Helzner with concert planning facilitated by chair James Perlmutter, the band from New York City mixed a number of its original creations with the band’s own take on some familiar pop tunes during the 90-minute show, performed without intermission.

One of their most spirited and longest-running numbers, “I Believe in Miracles,” included snippets of the refrain from the Beatles’s “Hey Jude” and the reggae beat of Bob Marley’s composition “Stir It Up.” The band also performed “Let It Be” and Leonard Cohen’s “Hallelujah.”

Backed by a single keyboardist, Pey Dalid easily transferred its positive vibes to the audience, coaxing the cantor and her sister Robin Helzner to form a dance line with dozens of concert goers that weaved in and around the aisles of the hall.

A reception for sponsors was held immediately after the concert.

Pey Dalid is an eclectic fusion of sound and story. Their live performance is an uplifting experience of musical styles, popular genres and “One World Music”.Armed with catchy melodies and thought provoking lyrics the brothers of Pey Dalid, Mordechai, Shlomo and Pesach Walker, have been performing across the world for the last 20 years, spreading the message of unity and peace through their sweet harmonies and lively music.

In the formative years the Brother’s gigged non-stop, influenced by a home filled with the classic standards of legends such as, Ella Fitzgerald and Miles Davis. The Brother’s learned of music’s power to bring cultural harmony at the knee of their father, a highly respected booking agent in the world of entertainment. As the Brother’s grew as musicians their love of hip hop, rock, reggae and the fiercely energetic mosh pits of their youth created an influential and inspirational Pey Dalid sound, which has been heard throughout the world.

Blessed with beautiful voices and the ability to uplift all those around them, the brothers have lead Shabbat and holiday services for communities throughout the globe. Pey Dalid’s recordings and live shows have attracted many well-respected musicians who have recorded and toured with them. Among them, the late great Lew Soloff, Grammy Award winning trumpet player for Blood, Sweat and Tears, who can be heard on their last album, “Open Eyes,” and on two new studio albums. One, recently released, is a Hebrew album titled, “Hashem Melech – The 12 Tribes,” and the other currently being recorded, an English album titled, “Soul Source.” The band’s current direction into many areas of world music give them a wide variety of market options and offer their following an unforgettable musical experience.